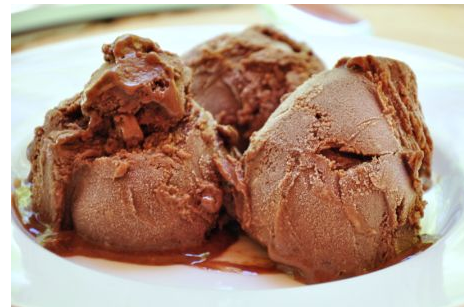 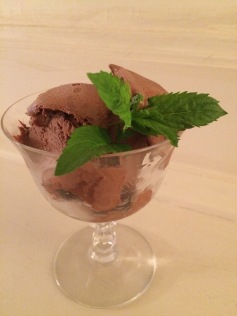 Photos: (left) website, (right) ours, with spearmint from the garden.

I. Would. Not. Have. Believed. It. This recipe for homemade gelato without an ice cream maker is delicious! It is the latest in Christopher’s and my Quarantine Cooking Quest to make what we have, until now, only found to be really tasty in restaurants.

200 grams chocolate of your choice. We used dark and semi-sweet chocolate chips. Next time, all dark chocolate.

Melt chocolate in a double boiler on medium high heat. (That’s just one saucepan sitting in another, slightly larger saucepan that contains a few inches of water. As the water boils below, the chocolate will melt in the pan above.) Watch and stir occasionally to avoid scorching.

Beat the eggs yolk and sugar until the mixture begins to lighten.

Heat the milk on medium heat and remove from the burner just before it starts to boil.

Add the milk to the egg-sugar mixture gradually, mixing thoroughly. Heat the mixture again, stirring occasionally until it boils. Remove from heat.

Add the melted chocolate to the milk-egg-sugar mixture. Mix thoroughly.

Here, we just put the pan into the freezer. But the directions say to transfer this mixture to a chilled metal container and freeze.

After 45 minutes, stir to break any ice lumps and return container to the freezer. Here, the directions say to do this step 2 more times. We just went to bed!

After about 7 hours of freezing, put the chocolate mixture into a food processor and pulse until smooth. (To spoon it out of the pan, I set it in a dish of warm water for a few seconds.)

At this point, you’ll have a chilled chocolate mousse. But, freeze it until firm and it will actually be no-crystal, smooth, rich, chocolate gelato. Voila! Or, Ecco!

Next stop: Beer battered fish and chips. This time for sure!